This year, the Blue Danube Waltz celebrates 150 years. With it, Vienna’s interpretation of the world’s ballrooms began.

Typically Viennese. On February 15th, 1867, only a few months after the worst military defeat against archenemy Prussia at Königgrätz, with many dead, wounded, and having been taken prisoners, the Viennese men’s singing club invited the members of a carnival committee to the hall of the Dianabad. Johann Strauss, making good on an old promise, contributed a waltz titled “On the Beautiful Blue Danube”. It did not take long, and the very industrious Strauss family was playing the waltz, which became the real anthem of Vienna, throughout Europe and later in the USA. 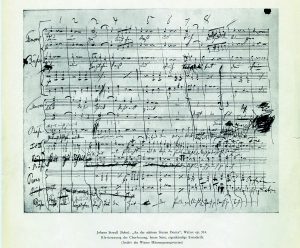 Because the catchy A major tune is one of the few melodies that is known almost everywhere around the globe. And in many places, it is inextricably linked with the ball culture, New Year’s Eve and ­Vienna. Moreover, the Blue Danube Waltz is, so to speak, out of this world. In the science fiction cult movie “2001: A Space Odyssey”, Stanley Kubrick had spaceships dance to the Strauss waltz while the interstellar crew weightlessly served snacks. Speaking of air travel. On Austrian Airlines, the Blue Danube Waltz can be heard coming from the loudspeakers after landing. This is precisely the time when the passengers push into the corridor, where they then remain squeezed between the seats, waiting at least another ten minutes for the respective gate to open. Some people’s nerves are on edge, because they want to be the first to wait in line for the luggage to arrive. It is certainly fitting to play something uplifting and happy just then. And, as a survey showed in the previous year, the customers are also satisfied (72 percent said they would miss the Blue Danube Waltz). 150 years after its premiere, this piece of music is likely to be the one to which all musical tastes can agree with. 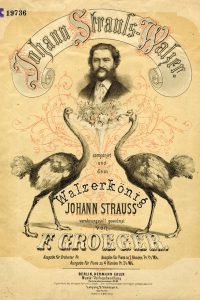 Until recently, the Vienna library at City Hall showed the exhibition “Danube, so blue. 150 years on the beautiful, blue Danube of Johann Strauss”, which traced the origin of the famous waltz using historic documents. According to these, Strauss’ “blue Danube” (after a poem by Karl Beck) is to have referred to a village in Hungary. At its premiere in 1867 at the Dianabad, a different text was sung, because in his version, Joseph Weyl, the “house poet” of the Viennese men’s association, took up the special circumstance of celebrating carnival so shortly after the defeat at Königgrätz. There were many other attempts at writing the final text, but the sweetly patriotic “Danube, so blue” by Franz von Gernerth of 1889 finally became the winning text.

Contrary to false representations, the Blue Danube Waltz was a huge success right from the start. The demand for piano scores was enormous – after all, there were no automated music players at the time. The international career of the “Donauwalzer” also began in May 1867, when Strauss performed the orchestral version at the international exhibition on the Champ de Mars in Paris. A later performance in London made the waltz known in the English world. A 100-men choir is said to have sung it at the performance in London. Strauss spoke of the “greatest concert of my work” – until later in the USA, where he was to lead even more extensive orchestras. 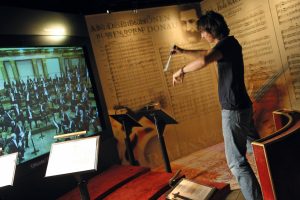 At the “House of Music” visitors can practice conducting the Blue Danube Waltz.

The Blue Danube Waltz has indeed become so popular that one often simply forgets its high musical quality. This begins with the fact that the most famous waltz in the history of music begins in a two-measure cycle (with the triad A–C-sharp–E) and not – as one would have expected – in ¾ time of the waltz as it is taught at dance schools around the world. And, strictly speaking, it consists of five waltzes plus introduction and coda. The main melody is, of course, so catchy that it has already been used as a radio melody for traffic radio (New Zealand) or for coastal radio (Uruguay).

And undoubtedly, a few bars of the Blue Danube Waltz suffice to get anyone attending a ball in Vienna into a celebratory mood. A New Year’s concert without the Blue Danube Waltz is unthinkable. This year, Gustavo Dudamel has again succeeded in producing a particularly powerful interpretation. 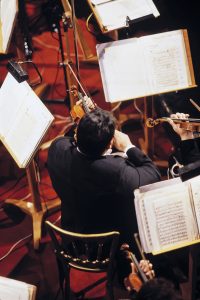 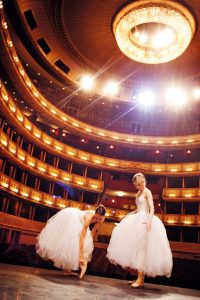