From da Vinci through Visconti to Versace: for the creative, the artistic and the cosmopolitan, Italy’s second largest city has always been the first choice. It is hardly surprising then, that Milan is still setting the pace with regard to the latest trends, the best design and the high art of la dolce vita.

There are people who “follow fashion”. The Milanese are different. The 1.3 million inhabitants of this metropolitan city “do not follow”, they “lead” but, more importantly, they “make” – fashion of course but also furniture as well as so many millions of euros that their city has long been considered the real center of Italy. Even if Rome is larger, Florence more glamorous and Venice more romantic, the heart of Italy beats here, in this bigbusiness metropolis between the Alps and the Mediterranean. The fashion journalist Tim Blanks once said of this city of Fashion Weeks and ﬂagship stores that “Milan’s grey is a shimmering color – like the silk lining of a suit made by Ermenegildo Zegna” but his statement is no longer quite correct because, since the World’s Fair of 2015 at the latest, the elegant grey of Milan has been joined by a great deal of fresh green. The most spectacular example – and for fans of architecture an absolute must – are the just under 100-m-tall residential towers of the “Bosco Verticale” near the Porta Nuova. Around 900 trees, 5,000 shrubs and 11,000 climbing plants grow on the terraces and balconies of the two eco-high-rise buildings, giving the impression of a vertical forest in the middle of the city. It is also only a short distance to the historical quarter Corso Como, which is extremely popular, and not just with nighttime revelers. During the day this quarter is also pulsing with life, for example at “10 Corso Como” (10corsocomo.com), a world-famous concept store that is an eclectic mix of art gallery, haute couture boutique, café, restaurant and lifestyle shop. “Milan has been given a new proﬁle but has retained its old heart. For me it is the best city in the world,” says Giorgio Armani of his hometown. For the Expo he gave the city a new museum located in an old grain silo (armanisilos.com). “Ma chiaro”, but of course, his competitor, Miuccia Prada, did not stand by and watch, but opened her own Fondazione Prada for contemporary art in a former distillery just one week later (fondazioneprada.org) … 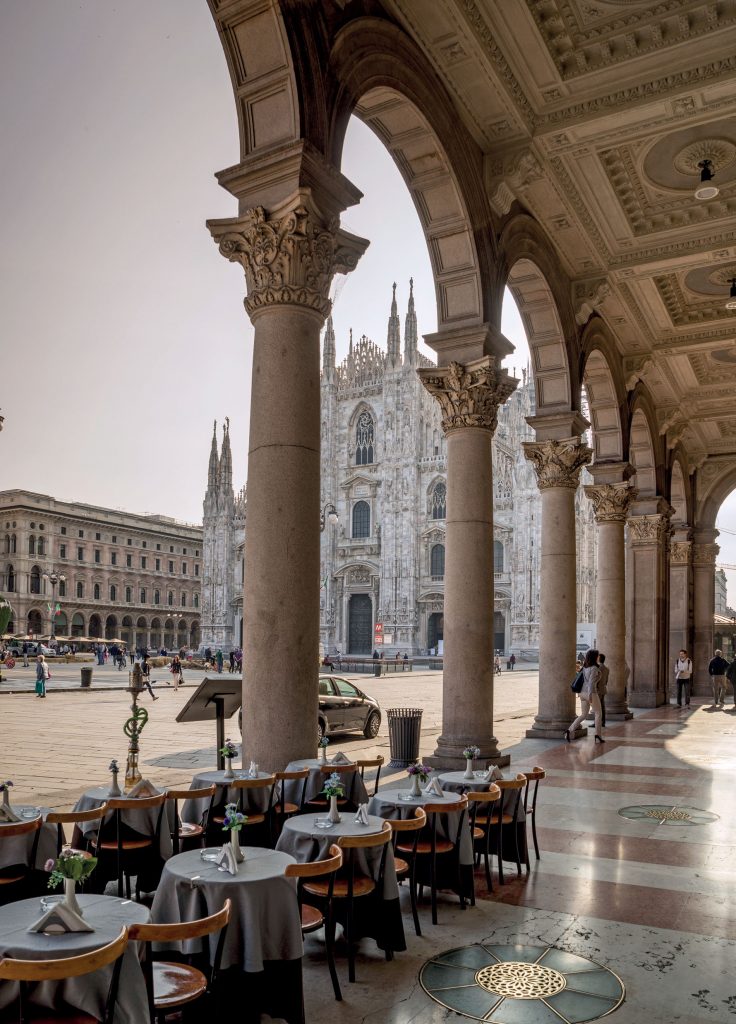 It would seem that for some years Milan has been going through a renaissance that has made it even more lively and attractive. Wherever you look, empty business premises are being transformed into fashionable pop-up stores. In the previously overlooked Isola district coffee shops and galleries are sprouting like mushrooms and around the Golden Triangle and the Via Napoleone, one of the most exclusive shopping areas in the world, luxury labels abound in their ever-expanding lifestyle temples. In the evening, if there happen to be no openings or couture cocktail parties
going on, people simply meet after work for a Campari, a Spritz or a Negroni in one of the legendary aperitivo bars. The originator of the “aperitivo milanese” is the “Camparino” (camparino.it), an elegant art nouveau bar with artful wood paneling and shimmering ﬂoral mosaics, where this world-famous bitter aperitif simply ﬂows. Nothing much has changed here either: the liveried waiters still serve your Campari soda or orange in white dinner jackets and black bowties, with a beaming smile and a dish of nuts and shiny Cerignola olives. And the toasts are still “Cin cin!” and “Alla salute!”. 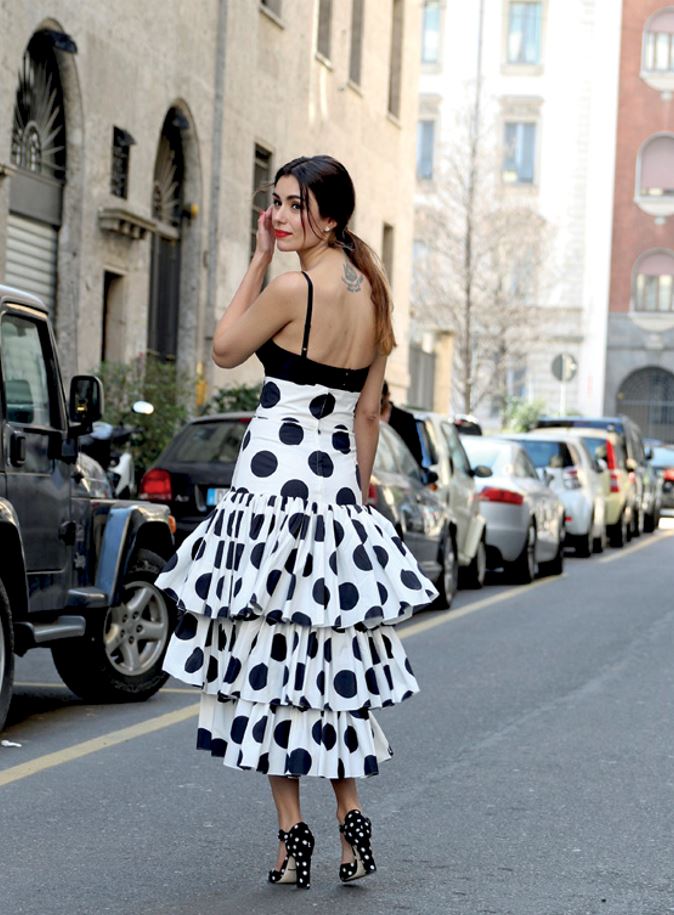 How pleasant that even in the city with the fastest changing fashion trends, some things never change. Incidentally, it is only a few meters from the Park Hyatt Milano to the Camparino, either through the legendary Galleria Vittorio Emanuelle II, one of the oldest, most luxurious and beautiful shopping arcades in Europe, or across the equally famous Piazza del Duomo, the city’s central square with its unique cathedral, known as the largest marble construction and third largest church in the world. The Park Hyatt Milano cannot possibly compete with such superlatives, but it has no need to do so because the luxury hotel, housed in a stately palazzo in a prime spot at the center of the city, has much to offer: for example 106 elegant and extremely tasteful rooms (25 of them suites), each furnished with Murano glass, the ﬁnest Italian fabrics and local natural materials such as marble, and travertine.

One of the highlights of this hotel, which has won multiple awards, is without doubt the Duomo Suite with its golden-tiled, open-air Jacuzzi and the spectacular view of the cathedral from its private terrace. Another feature worth seeing is the Cupola Lobby Lounge with its glass dome, which is reminiscent of the architecture of the Galleria next door and is a popular meeting place. Andrea Aprea, chef de cuisine of the VUN, who has a Guide Michelin star, conjures up haute cuisine with a local ﬂair. The name of the hotel’s restaurant comes from the word for “one” in Milanese dialect – a good choice since, after all, the VUN is known as the absolute “Numero Uno” in the city. 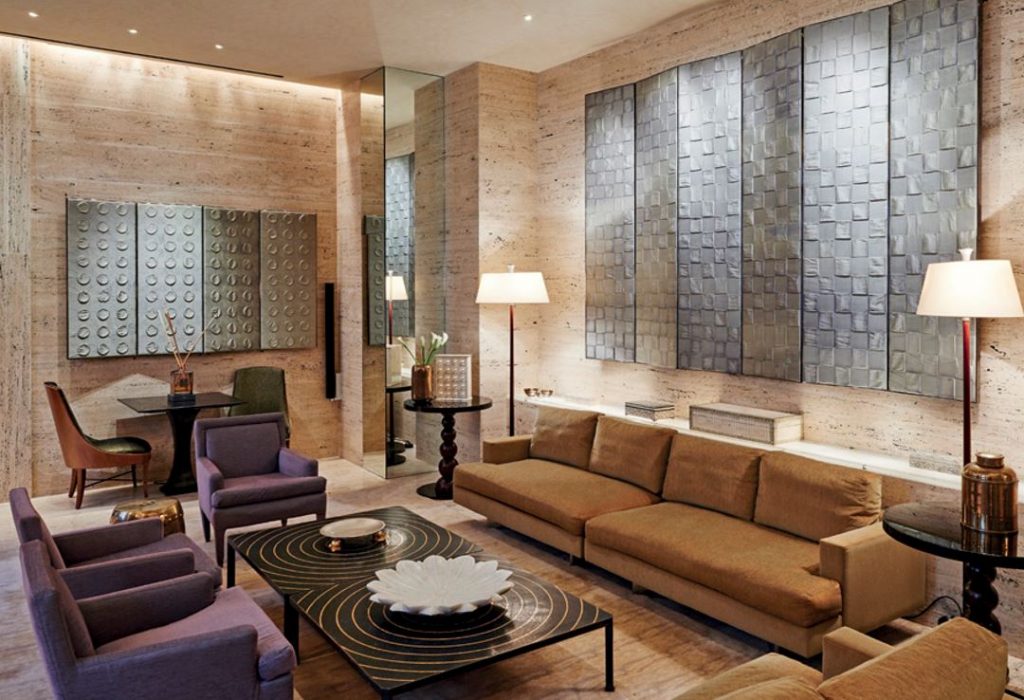